Photo-manipulation tutorial: How to make a fairy in a bottle

This tutorial was originally commissioned for the book "Surreal Digital Photography 2" published by Ilex Press Ltd. in 2007. I am now sharing an edited version here with everyone for free!

If you're sad because fairies don't exist in real life and you weren't born as one, now you can learn how to make yourself appear as a magical fairy with wings!

This is an advanced tutorial where I don't explain all the basic tools, so if you're a beginner I suggest reading these articles first:

Step 1: Removing the background from the bottle

I photographed this glass bottle against the red wall. 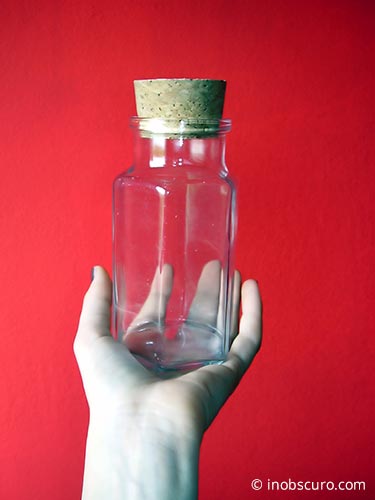 Red walls are nice to have, but we don't want them in the final artwork, so here's what I did to remove the wall from the background. I chose the foreground color to be a bright red #C91828 and went to Select > Color Range.

I made sure that the hand and bottle edges are black, while the background and glass are white, and I increased the Fuziness setting until it looked like this. (Click on OK when you're done) 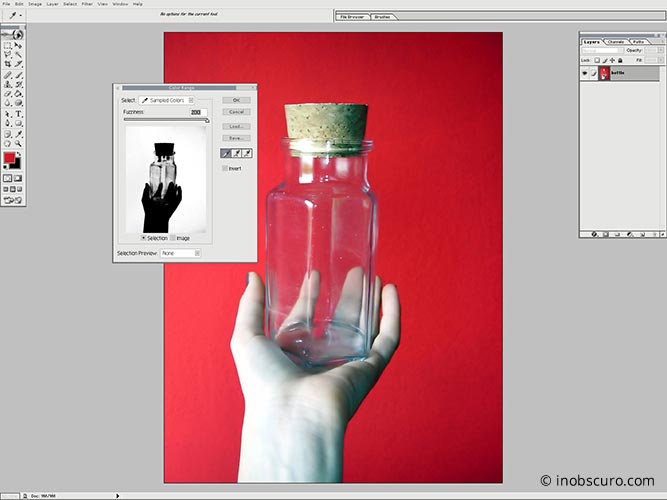 Then I used the Select > Inverse command (Ctrl+Shift+I) and clicked the Quick Mask icon (Q), then double-click it and change the mask color to green (#00FF00) 100% so we can see the difference more clearly. After I used the black brush to mask the background where it's still not clear green, and white brush to bring back parts of hand and bottle which were hidden. 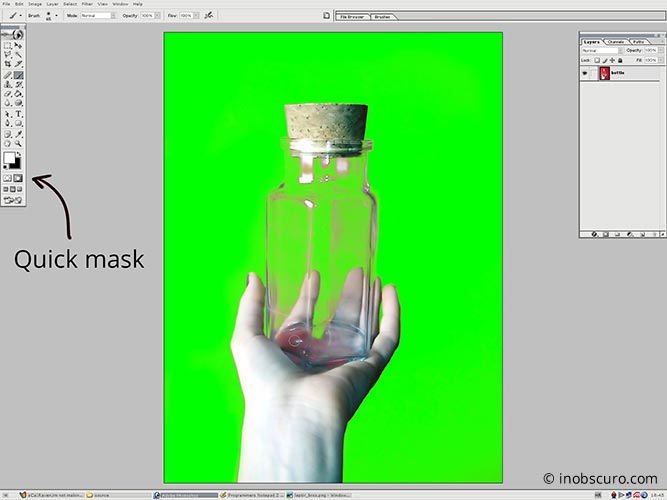 I pressed Q to get back to normal mode and apply the layer mask. I went over the glass with the Sponge tool to remove red tint from reflections. 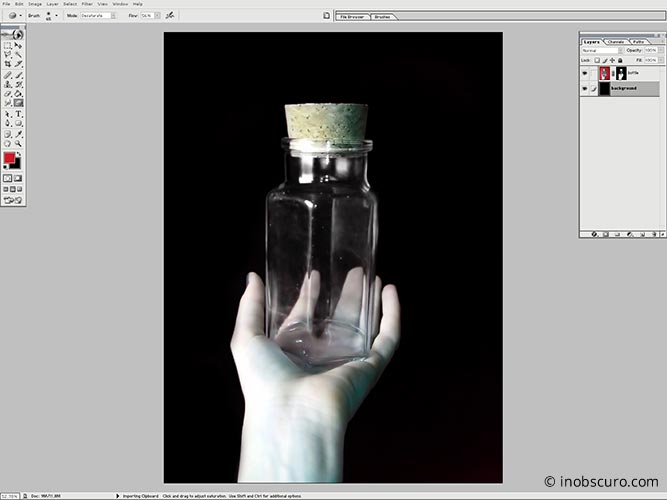 I made a new layer set named "background", and filled one layer with medium brown, then added a few texture images. You can download my free textures here. 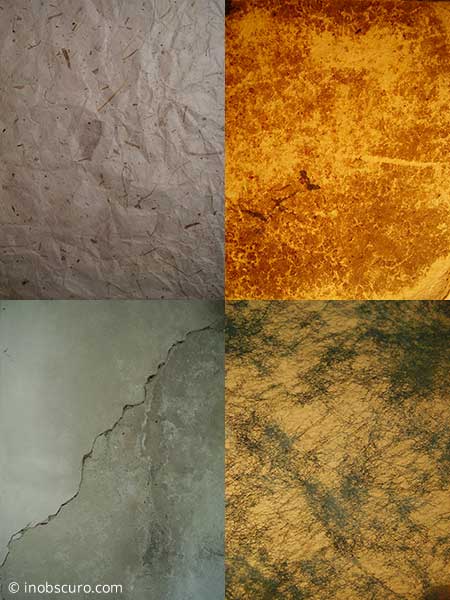 I set the blending modes of each to Overlay, Hard light or Soft light and varied the Opacity between 30% and 50%. I experimented with these setting unti I was satisfied with the looks. 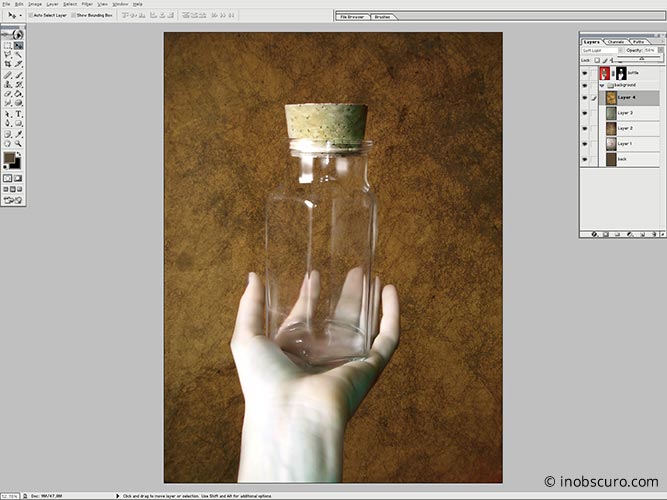 Step 3: Turning a human into a fairy

I used this photo, photographed specifically for the purposes od this artwork. 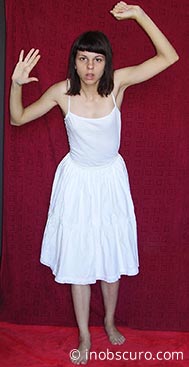 I selected the area arount the girl loosely with a Polygonal Lasso tool. Then I pressed Q to enter the Quick Mask mode again, and painted over the remaining background with a black brush (the mask appears green). If you make a mistake doing this, use the white brush to bring deleted part back. 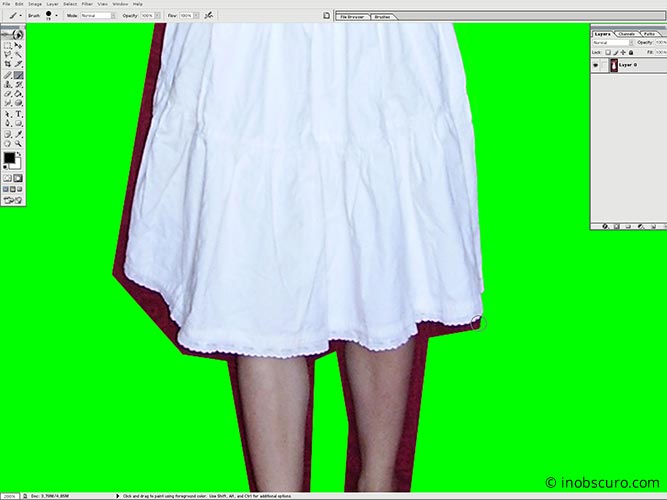 When I was done I pressed Q again, copied (Ctrl+C) the selected girl and pasted (Ctrl+V) into my working document. I flipped the bottle image horizontally so that the shadows on the bottle and the girl match. 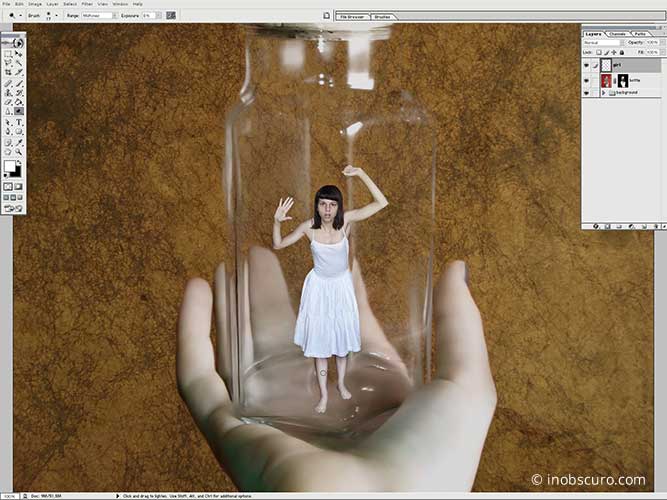 I selected the Dodge tool and used it to lighten areas where the light seems to fall. I used Burn tool on the left edge of palm a bit to add more shadows. 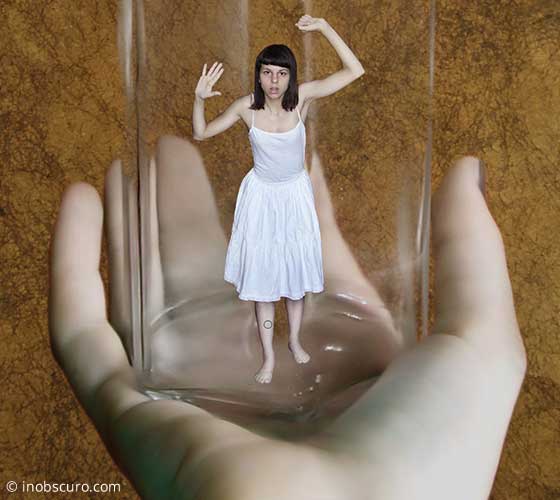 I selected the Dodge tool and used it to lighten areas where the light seems to fall. I used Burn tool on the left edge of palm a bit to add more shadows.

I used a photo of the butterfly and cut the wings from the rest of the image as I described already, and copied both of them on the layer under the girl layer. I transformed them so they fit the girl's pose. Then I applied a layer mask and painted around the wing edges to make them fade softly into the background. 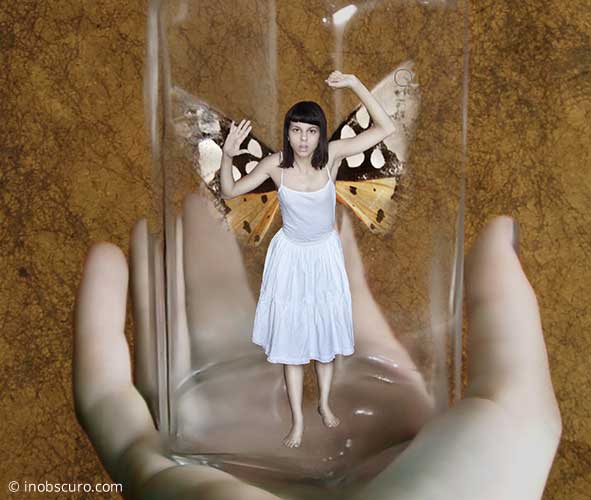 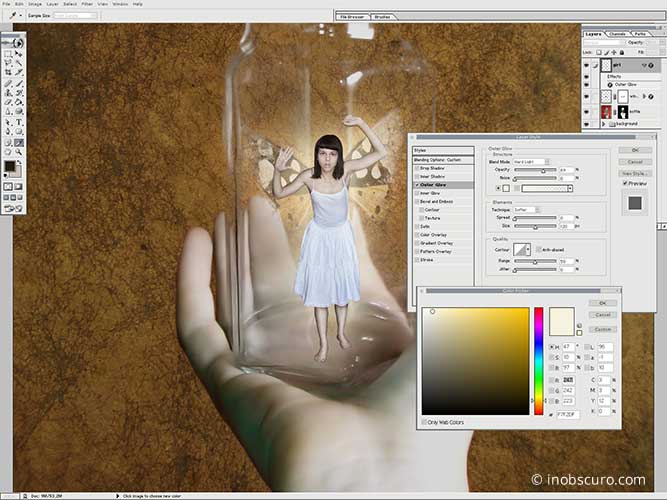 This step is optional, and depends on the girl model you are using &8212; since I didn't like the original hair, I painted new hair on a layer above. Even if you can't paint, you can do the same by using hair brushes available for free on numerous websites, or you can cut the hair from another photo. 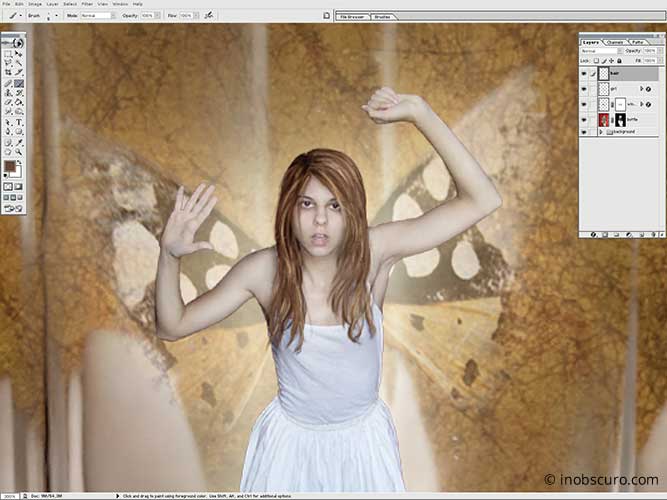 Creating fairy dust is very easy. Make a new layer with blending mode set to Overlay, about 75% Opacity. Take a soft white brush and click around on a separate layer, varying brush size.
Repeat this on a layer between the body and wings, this will add dimensionality to the image. 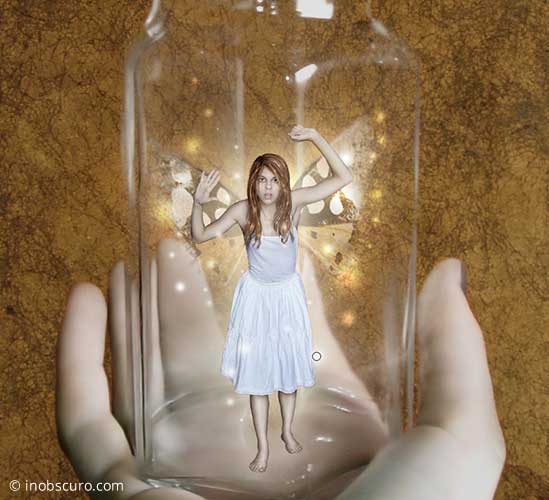 We must not forget about the glass in front. I made a new layer on the top and drew a vertical line with a soft white brush (about 30% Opacity), then a thin black one next to it. I use the Blur tool to blur the body and wings directly underneath this line. Then I blurred some more on the parts that are further from the glass, while leaving the face and right palm completely crisp. 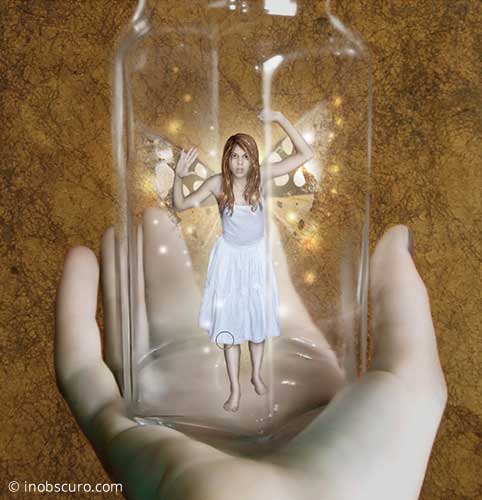 The last thing to work on is the atmosphere. I added another texture on top of the document 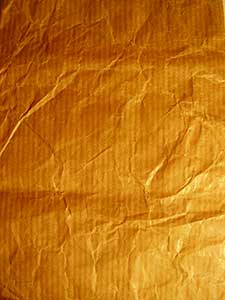 I set the blending mode of the texture to Soft Light and lowered Opacity until it looked the way I wanted. I masked the parts where the texture looked too intensive, especially the face and hands. I also added some shadows on the background beneath the hand to get a more threedimensional look.

Here's how the final image looks (click to see a large version in my portfolio!) 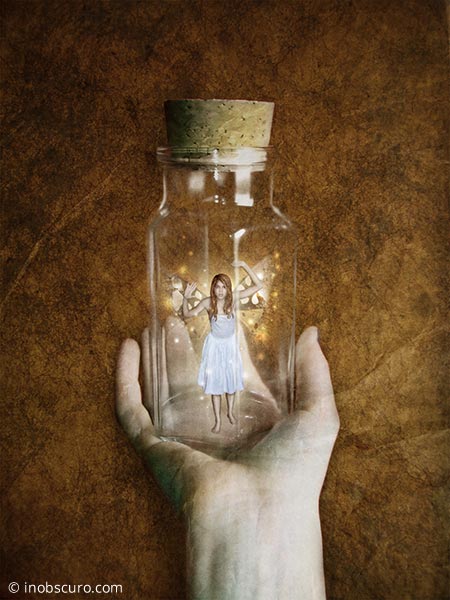 
Photoshop brushes for commercial use 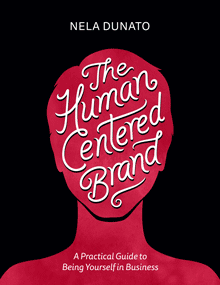 The Human Centered Brand: A Practical Guide to Being Yourself in Business